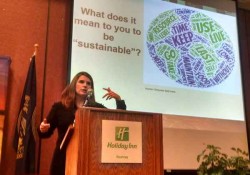 The chair of the U.S. Roundtable for Sustainable Beef says the group is making progress in defining the parameters of sustainable beef production.

Nicole Johnson-Hoffman tells Brownfield her goal is to give beef producers a framework and platform for discussing sustainability.

The roundtable is working on what it calls “high-priority indicators”, Johnson-Hoffman says. They include animal health and well-being, water and land resources and greenhouse gas emissions.

“The urgent issue of today is trying to bring some kind of organization and some kind of coherence to the discussion around sustainability—and minimize the noise,” she says. “If we can accomplish that today, that’s not something that really is going to require producers to incur additional costs.

“I’m not asking producers to do things differently right now. I’m just asking them to come to the table.”

Johnson-Hoffman is a vice president in Cargill’s meat division and leader of Cargill’s global beef business with McDonald’s. She spoke with Brownfield at the recent Governor’s Ag Conference in Kearney, Nebraska.